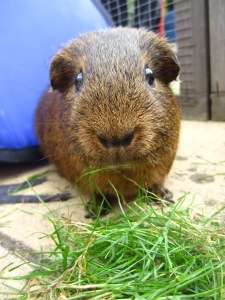 As Mummy has just pointed out whee does not has thumbs to be green but that is beside the point. Today in the garden whee noticed something. Mummy is a truly terrible gardener but somehow some things in our garden have survived. Here is out garden so far.

The cucumber was nicknamed the unlucky cucumber as it was repeatedly dropped and Mummy believed it was DOA (dead on arrival). Within days it had vanished. It’s vanishing was blamed on notorious criminal slugs and snails reported to be operating in the area, however, imagine efurryones surprise when whee found a weak looking little stalk today:

The basil plant was rather more unlucky and died pretty quickly when Mummy forgot to water in during the hot days. There is nothing left to pigture!

The curled parsley plant might have been over nommed and under watered because it doesn’t really look too well!

Finally the good news! One set of plants are doing well! Whee will be having tomatoes furry furry soon! 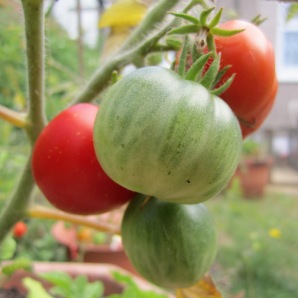 Also, Mummy’s apple tree which has done nothing for two years has suddenly decided to give her a baby apple this year! Hooray!

Does you have a garden? How’s your garden doing? Is your hooman a horticulture disaster or green fingered fabulous?